The European Rugby Champions Cup quarter-finals are upon us, and there is one tie that stands out above the other three in this round of fixtures; Leicester Tigers hosting Leinster at Mattioli Woods Welford Road. The Tigers have been in sensational form this season, having led the English Premiership since the first day of the season, and look very much back to their best under Steve Borthwick and his team. Leinster, meanwhile, currently top the United Rugby Championship and are six points ahead of second-placed Munster, putting them in pole position to secure a fourth successive league title (Pro 14 and URC combined).

This tactical preview will look at this mouthwatering encounter between two of this season’s most dominant clubs, with a look at their confirmed lineups, what tactics we can expect from them and key head-to-head battles. The analysis will also look at which substitutes could make the difference for each side in what is widely expected to be a hard-fought match, before concluding with a predicted result. 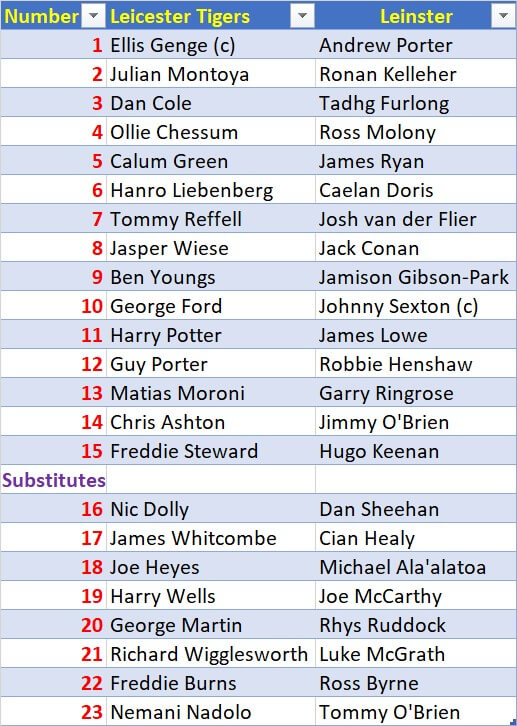 Leicester Tigers have made just one change to the side that defeated Bristol Bears last weekend, with England’s Ollie Chessum coming into the second row to partner Calum Green, replacing Harry Wells who drops to the bench. Chessum, who can feature at lock or as a flanker, was banned after Leicester’s last European game against Clermont, but is now back in contention and has been given the nod by Steve Borthwick. Tommy Reffell and Hanro Liebenberg continue ahead of George Martin in the back row, whilst England loosehead Ellis Genge once again captains from the front of the pack.

Leinster have been in South Africa over the last couple of weekends, completing URC matches against Sharks and Stormers (both of which ended in defeat for Leo Cullen’s team). However, they have named the same team that started in the dominant second leg win against Connacht in the previous round of this competition, with just one new name included. Like the Tigers, the alteration is in the second row, with Josh Murphy dropping out and James Ryan coming back in, having recovered from a head injury sustained whilst playing for Ireland against England in the Six Nations. Leinster will be looking to their front row to make life difficult for Leicester at set pieces, whilst the half-back partnership of Jamison Gibson-Park and Johnny Sexton is sure to be at the heart of their attacking play.

The first head-to-head to look out for has to be George Ford against Johnny Sexton, with both fly-halves having good spatial awareness and an ability to create opportunities for their teammates with accurate ball distribution around the field. Whichever team has more chances in the opposing 22 will likely come down to which of Ford and Sexton has the better game and is quicker at making decisions in possession.

The back rows will be crucial to controlling the flow of the game when attacking, defending and at set pieces. For Leicester, South Africa international Jasper Wiese can be expected to have a huge impact on the game, making big carries and breaking through any gaps that Leinster leave open, whilst Tommy Reffell is a very underrated flanker who has proven essential to the Tigers’ defensive pressing over the last couple of campaigns and Hanro Liebenberg always poses a threat, both with and without the ball.

Meanwhile, Leinster have arguably one of the best flankers currently in the game. Josh van der Flier has specialised in making late runs and breaking through defences at pace with the ball, whilst Jack Conan will be vital at the base of scrums and could be used to pick the ball up at these set pieces. Caelan Doris can be expected to rack up plenty of carries throughout the game as well, so both teams have plenty of power and threat from the rear of their packs which will be critical to their attacking and defensive efficiency.

Finally, the two full-backs’ performances could be pivotal, with both Freddie Steward and Hugo Keenan excellent ball carriers. However, both also like to come forward and be aerially dominant, catching balls off the ground and launching attacks from as high up the pitch as possible, and this is something we saw a lot of from both during the Six Nations this year.

However, both also need to be robust defensively, given that they will be the last player back when the opposing side is running at the try line, and which of the two makes more dominant tackles and ends more threats could be what decides the outcome of this match.

Leicester’s bench contains plenty of star names who might consider themselves unlucky to not be in the starting XV, with England star Martin always a threat at the breakdown and likely to have a big impact once introduced to the game, whilst experienced Fiji back Nemani Nadolo is always difficult to stop when in full flow. If Leicester are down during the second half, we can expect him to come on and add a lot of power to the Tigers’ play.

Meanwhile, tighthead Joe Heyes is an excellent scrummager and it will be interesting to see how he fares against Andrew Porter and Cian Healy (Leinster’s replacement loosehead), whilst experience is preferred by Steve Borthwick in the middle of the park, with Wigglesworth included ahead of the likes of Jack van Poortvliet.

For Leinster, hooker Dan Sheehan has been one of the most athletic front rowers this season and loves to make carries and score tries, so we can expect him to cause problems at Welford Road once brought on, and Healy is an experienced international prop who always makes a difference. Ross Byrne’s time as Johnny Sexton’s understudy continues, although he is also a reliable kicker so shouldn’t be underestimated, whilst highly-rated academy product Tommy O’Brien will add some flair and speed in the back line if he is called upon.

This is a really difficult one to call, because both teams have their first-choice players in the team and both have the ability to cause the other problems. Leicester will also be boosted by the fans at Welford Road, as they will undoubtedly make a lot of noise and create an atmosphere that Leinster will perhaps find imposing to play in.

However, it is likely that Leinster might just edge it, for three reasons:

Firstly, they are coming into this game on the back of two defeats, even though the teams were composed mostly of younger and fringe players, so they will feel like they have something to prove.

Secondly, Keenan is marginally a better defensive player than Steward, so it is likely that Leicester might find it harder to defend against Leinster’s key attackers, particularly their star midfield partnership of Robbie Henshaw and Garry Ringrose, whilst winger James Lowe is the tournament’s top try scorer this season.

Thirdly, Sexton has slightly more experience than Ford, and this could be decisive in Leinster finding more spaces around the pitch. However, these thoughts could all turn out to be wrong – it really is that tight to call.

“A major factor in Leicester’s resurgence”: Why the Tigers’ recruitment has been key to their recent revival on the pitch – tactical analysis